Man needs difficulties in Life because they are Necessary to Enjoy the Success – A Story by Kritika Sharma, HWCT Volunteer - Donate for a cause

Man needs difficulties in Life because they are Necessary to Enjoy the Success – A Story by Kritika Sharma, HWCT Volunteer

Homepage Charity Man needs difficulties in Life because they are Necessary to Enjoy the Success – A Story by Kritika Sharma, HWCT Volunteer
Charity

Man needs difficulties in Life because they are Necessary to Enjoy the Success – A Story by Kritika Sharma, HWCT Volunteer

Ramesh, a 14-year-old, Vithalwadi habitant, residing in a Vithalwadi village felt that life hadn’t really been fair to him. He could see the skyscrapers by climbing at the top of the rickshaw his father owns, but while climbing down his feet and heart did not just touch the ground but were willing to go the mile too. He realized the disparity between the two worlds and felt like breaking through it. But this did not just happen overnight and it took time for him to reach here after having had his share of experiences down the bad road.

Ramesh had become a cannabis addict at the tender age of 11 after falling into bad company. He helped his father with the rickshaw sometimes, but mostly just hung around with the neighborhood boys, all like him. His parents, mother Uma bai and father Anand, tried very hard to make him come out of it, even using force at time. But Ramesh didn’t see a future to his life and did not want to drive rickshaw to support himself. He felt like drugs were his escape making him forget about his reality. He didn’t even think he had a shot at making it in his life even after having the mind and zeal for it. Machines interested him, owing to his father’s rickshaw. He might have never wanted to ride it, but he was really interested in the working of it. But not having the resources to know more about them or anything for that matter, Ramesh gave up.

Though he left behind the world of drugs but couldn’t look away from his own. He started helping his father full time and earning at the tender age of 14. He has been doing this for a year now, away from where he should ideally be, i.e. in a school.

So, when HWCT came in contact with a school in his neighborhood, there was a glimmer of hope. The students coming from poor backgrounds did not have even the basic resources to continue going there. These included books, school bags, stationery, water bottles etc. HWCT provided these basic necessities to help them continue their education. Ramesh is one of the students too now, among so many others and he couldn’t be more thankful to his parents for letting him pursue his dream of becoming an engineer. He is already one of the brightest in his class. Every day that he spends educating himself inches him closer to the world that he hopes to be a part of.

Previous Story
Your Parents showed you the World…. And in return you showed them the old age home…A Story by Kritika Sharma, HWCT Volunteer
Next Story
“Thanks to HWCT, I could get back to the fields”- A Story of 87-Year-Old Yashodhar Vaity 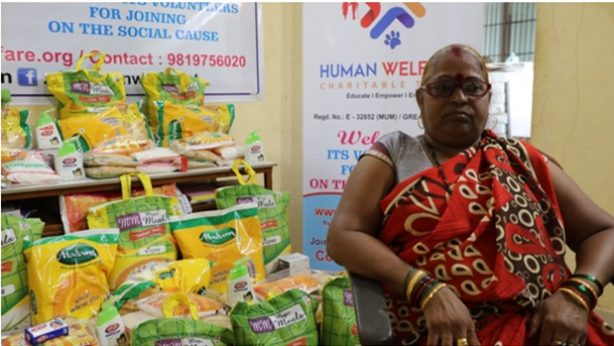 Sunanda lives in Malvani, Malad, with her two children, Sameer...

Originally from Uttar Pradesh, Zubaida now lived with her husband...